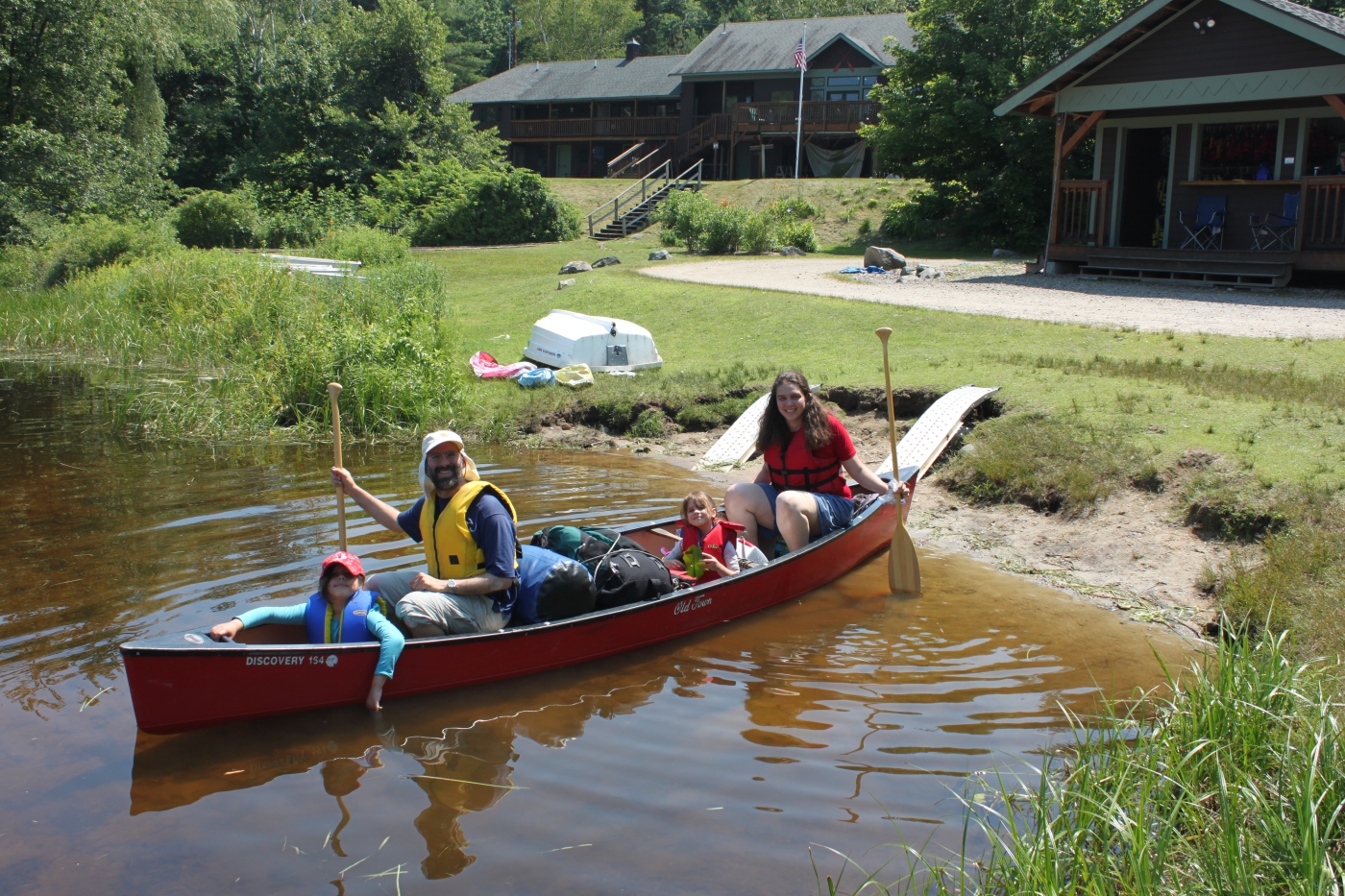 This weekend Kate and I took the kids canoe-camping on Squam Lake.  Squam is the second-largest lake in New Hampshire, just north of its big brother Lake Winnipesauke. This was our third such trip for the wife and me, and the second with the kids.

For an outing where you’re supposedly leaving it all behind, we sure did take a lot of stuff with us!  We crammed the canoe with gear: a four-person tent, Therm-a-Rests and camping pillows, sleeping bags,  food and water, camp stove and fuel, bowls and cups, clothes, bathing suits, flashlights, bug spray, camera, water filter, first-aid kit, and a few other sundries.  Kate is a master of canoe-packing, and so we were able to squeeze everything in and still have room for four humans.

(All pics in this post can be clicked to enlarge.)

We paddled out of Piper’s Cove and began the four-mile cross-water journey to the dock on our peninsula.

Going out was easy – the wind and current were both with us – and we enjoyed a hot, dry afternoon en route to our dock.  From there it was a five minute walk to the campsite, where we quickly made ourselves at home.  Kate took the kids swimming at a little beach a few minutes away while I sorted out the tent interior and started organizing dinner.

Dinner was couscous with raisins and peanuts, but the kids had their eyes on the prize:  the post-dinner s’mores.  As Kira would happily tell you, just as she told us about fifty-eight times during the weekend, the best part of camping is the s’mores.

After we cleaned up from dinner, there was time for a sunset paddle.  I was granted a reprieve, as Elanor volunteered to paddle at the front, freeing me to sit in the middle of the boat with Kira and take pictures. The sunset over the lake was just glorious.

Bedtime went reasonably well, given that we were all sharing the same tent.  Kira was convinced not to sing too loudly, since we were all interested hearing the evening loon calls.  The loons did not disappoint!  (In fact, the loons were the one saving grace for me later that night, as my aging bones rebelled against sleeping on naught but a Therm-a-Rest.  Those things sure were more comfortable twenty years ago!  But as I lay in ‘bed’ trying to find a comfortable sleeping position, I was treated to a wild concert of warbling loons, their distinctive cries echoing around the lake.)

The next day was full of camping-related activities:  a morning paddle, a hike through the woods, more swimming for the kids, with Kate and I tag-teaming to allow each parent a bit of a rest break.  (Camping with kids 4 and 7 years old is a far cry easier than doing so with 2 and 5 (our previous trip to Squam), but it’s still a handful for the parents!)

Elanor was bit grumpy at the start of our hike, complaining of weary legs and itchy mosquito bites, but her spirits were lifted first by some good scrambling rocks, and then by a boardwalk across a dense swamp.  You may wonder why the swamp was a highlight; let me show you:

The walkway through the swamp featured thick blueberry bushes growing on both sides.  It was only the last day in June, and so most of the berries were unripe, but even the 1% that were edible provided a feast for the fruitophile. The kids spent about half an hour collecting, and Kira took great delight in bringing me the fruits of her labors. After one such handful, I told her “I’m the luckiest dad in the world!” Her response was to become grave, and to don the expression unique to children who have caught their parents breaking their own rules. “Don’t brag,” she admonished.

Dinner that night was simple:  I had purchased two bags of freeze dried dinners (cheesy pasta with vegetables), which are prepared by boiling water, pouring the boiling water into the bags, stirring, and waiting.  It meant we had more time for s’mores and another evening outing in the canoe.

We were audience to more loon calls that night. The next morning Kate woke early and went out with Elanor on a canoe-outing to collect more blueberries for our oatmeal. They also pumped some filtered water en route, since on such a hot weekend our store of water bottles had run low. And then, sadly, it was time to pack up the site, reload the canoe, and head back to Piper’s Cove.

A crowd of boats at the dock had forced Kate to park the canoe on the far side of the peninsula, but thanks to our ever-growing children, we were able to carry all of our gear in a single trip.  Also, we were fortuitously placed to rescue a pair of teenagers who were stranded across the bay from the dock, having wrongly assumed their little spur had a connecting trail to the nearby larger peninsula. Since we had already loaded the canoe, Kate and Elanor ferried them across one at a time.

The return journey was more vigorous for the grown-ups, with a strong headwind kicking up chop, and the prevailing current going against us. Also, it seemed that every five minutes a motor boat would speed past, sending out a wake that would rock our boat up and down. “I love the choppy waves!” exclaimed Kira. “Wooooohooooo!” Elanor shouted.  “$#@!” grumbled the parents. But with Kate providing 100% of the steering and about 75% of the propulsion (they didn’t call her ‘Paddles-Like-the-Wind’ at Cornell for nothing!) we made good time and avoided capsizing.